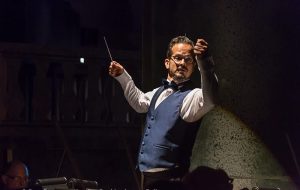 A modern-day Renaissance man, Mark Sforzini is currently the Artistic and Executive Director of the St. Petersburg Opera and Music Director of the Tampa Bay Symphony. Since 2005, he has conducted more than forty fully staged operatic and theatrical productions around the country to high critical acclaim: “Sforzini’s supple conducting of the orchestra provided perfect support, not only for the singers but also for the unfolding drama. The overture was crisp and expressive, as well.” (St. Petersburg Times, Jim Harper).  “Conductor Mark Sforzini blends 31 musicians and instruments into a single wave of music that can rush over you or gently flow, invisibly manipulating mood and scene, bringing out the best in the cast. You could go just for the music and not be disappointed.” (Ash Lawn Opera, Fiddler on the Roof – The Daily Progress, Clare Aukofer)

Sforzini conducts a full range of repertoire:  orchestral, chamber, and pops, in addition to Broadway and opera. He has appeared as guest conductor with groups such as Ash Lawn Opera, Crested Butte Mountain Theater and Auburn Symphony Orchestra and locally with Sunstate Opera, Northside Baptist Church, University of South Florida as well as serving as conductor of the Pinellas Youth Symphony from 1999 – 2002 and FloriMezzo from 2002 – 2008. Prior to establishing his conducting career, Sforzini was principal bassoon of the Florida Orchestra for fifteen seasons. He played eleven seasons as principal bassoon at the Crested Butte Music Festival where he was also the Composer-in-Residence in 2003 and many more of his compositions have been commissioned and premiered in years since. He has premiered a number of new compositions as both bassoonist and conductor, and is in demand for coaching singers, composers and instrumentalists.

His compositions have been performed by the Florida Orchestra, Omaha Symphony, Sarasota Orchestra, Naples Philharmonic, Alabama Symphony, Brevard Symphony, and Tampa Bay Symphony, as well as heard at the Eastern Music Festival, the Chautauqua Institution, the Toledo Symphony chamber concerts, Crested Butte, and in the Palladium Encore Series in St. Petersburg, of which Sforzini was Artistic Director for several years. His works were also featured at the University of Tampa when he was Composer-in-Residence in 2011.

Over the course of his career, Sforzini has taught at the Sewanee Summer Music Center and Kinhaven Music School as well as an adjunct at Florida College and St. Petersburg College. He has given master classes at Rice University (Shepherd School of Music), Florida State University, St. Petersburg College, University of Tampa and frequently at St. Petersburg Opera as part of that organization’s Emerging Artists Program. He has served as an adjudicator for the Altamura/Caruso International Voice Competition, Walker’s Rising Stars and Florida Suncoast Opera Guild as well as a panelist for Voice Experience.

Sforzini was recently chosen by Musical America as one of thirty international industry professionals as a “Profile in Courage”.  These top industry leaders have “taken a risk, spoken out where others were silent – all to the measurable benefit of their arts organizations and the field”.