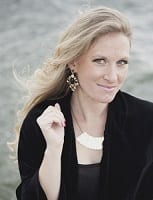 Described as “a voice of size, clarity and wide coloristic range… a three-dimensional figure who combined vulnerability with strength and tugged at the heartstrings in her every breath and movement”  (Pittsburgh Post Gazette), soprano Lara Lynn McGill was last seen with St. Petersburg Opera as Pamina in Die Zauberflöte.  Before that she portrayed Romilda in Xerxes with Pittsburgh Festival Opera after returning from St. Pete Opera where she made her debut with Antonia in Les contes d’Hoffmann.  One of her favorite roles with Pittsburgh Festival Opera was Cleopatra in Julius Cesaer in 2016 directed by Dan Rigazzi.  In 2015, again with Festival Opera, she portrayed Alice Front in the world premiere of A New Kind of Fallout.   In the same year, she also premiered the role of “Story” in The Heart of Shahrazad with Amiche Artists.  Other operatic roles include: Donna Anna with Opera Western Reserve, Mamah in Shining Brow, Susannah in Carlisle Floyd’s Susannah, Sandrina in Mozart’s La finta giardiniera, Adina in The Elixir of Love, and her Pittsburgh Opera debut as Barbarina in Le nozze di Figaro. She covered Frasquita in Carmen as an Apprentice Artist with Sarasota Opera and performed The Foreign Women in Menotti’s The Consul with Opera New Jersey. Her concert work includes Vaughn Williams’ Dona nobis pacem, both the Handel and Vivaldi Gloria, Brahm’s Requiem and Schubert’s Mass in G.   Lara graduated with her master’s from Eastman School of Music and her bachelor’s from University of Miami Frost School of Music.  Her recital appearances include the eastern United States, Idaho, Italy, Austria, and South Africa.