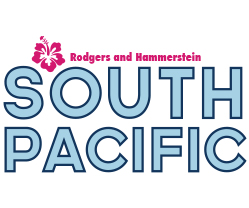 Book by OSCAR HAMMERSTEIN II and JOSHUA LOGAN
Adapted from the Pulitzer Prize winning novel
“Tales of the South Pacific” by James A. Michener

Richard Rodgers and Oscar Hammerstein II created the adorable Nellie Forbush, who falls for the planter Emile DeBecque, only to have their love tested by her intolerant upbringing.  Nellie sings what have become American standards: Cockeyed Optimist, I’m in Love with a Wonderful Guy, and Wash That Man Right Outta My Hair. Emile sings the mega hit Some Enchanted Evening.

The young Lieutenant Cable is captivated by a native woman’s daughter, and in order to find happiness, both he and Nellie have to unlearn the racial prejudices they were carefully taught as young people. Cable gives us Younger Than Springtime. The mother, Bloody Mary, give us Bali Ha’i and Happy Talk.

Restless American Seabees and Navy nurses mingle with soldiers and Marines, and they all interact with the locals on this South Pacific Island as the war gets nearer and nearer to their remote outpost in this WWII Theater.

South Pacific is one of the most beloved musicals of all time; the incredible Molly Mustonen plays Nellie , with Todd Donovan as Emile De Becque.

This powerful duo is complemented with Carla Lopez-Speziale as Bloody Mary, and handsome John Kaneklides returns to the SPO stage as Lt. Joe Cable, USMC.  Ward G. Smith* of stage and screen and Tyler Putnam join the cast as Captain Brackett and Luther Billis respectively.

Don’t miss a single note.  After all, there’s nothing like a dame!

Directed and choreographed by Zetta Alderman

Capt. George Brackett, USN – commanding officer on the island, slightly pompous, but not without a soft side
Ward G. Smith*
Rim Karnavicius, cover

Complete Ensemble of US Servicemen and Nurses

*Mr. Smith appears through the courtesy of Actors’ Equity Association, the Union of Professional Actors and Stage Managers in the United States.