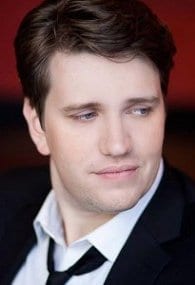 Adam Cioffari (Stage Director) recently directed The Merry Widow and Amahl and the Night Visitors for Opera Project Columbus. He began the 2018-2019 with Pittsburgh Festival Opera as Fasolt in Rhinegold and Count Lamoral in Arabella, followed by Masetto in Don Giovanni with St. Petersburg Opera, and Beethoven’s 9th Symphony with the Arkansas Symphony. He appeared with the Columbus Symphony in performances of  Messiah and Mozart’s Requiem. The previous season’s engagements included Verdi’s Requiem with the Akron Symphony, Ibn-Hakia in Iolanta with Queen City Opera, and Masetto with Salt Marsh Opera.

Recent appearances include Judge Turpin in Sweeney Todd at Pittsburgh Festival Opera, the Commentator in the world premiere of Wang’s Scalia/Ginsburg at the Castleton Festival, the Musiklehrer in Ariadne auf Naxos at The Glimmerglass Festival, Papageno in Die Zauberflöte and the Novice’s Friend at Teatro Municipal de Santiago, Figaro in Le nozze di Figaro with Opera Columbus, Colline in La Boheme with Knoxville Opera, and Masetto with Austin Opera. He has performed with the Los Angeles Philharmonic, the Theatre Capitole de Toulouse, Utah Symphony and Tucson Symphony, Pensacola Opera, and Florentine Opera. Future appearances include Papageno in The Magic Flute with Salt Marsh Opera and Colline with Pacific Opera Project.

He made his debut with the Staatsoper Stuttgart as Masetto, and also appeared there as Patrocle in Iphigenie en Aulide and the High Priest of Baal in Nabucco, and Angelotti in Tosca. He joined Komische Oper Berlin as a member of its studio, appearing in a dozen roles over two seasons, including Morales in Carmen, the 1st Nazarene in Salome, and the Night Watchman in Die Meistersinger.

A former member of the Houston Grand Opera Studio, he created the role of Stanley in the world premiere of Andre Previn’s Brief Encounter. Other performances with the company include Elviro in Xerxes, Angelotti, and Snug in A Midsummer Night’s Dream. He was a participant of the Merola Opera Program, the Music Academy of the West, Aspen Opera Theater, and is a graduate from Indiana University Jacobs School of Music.