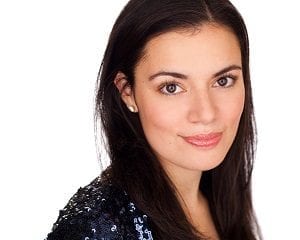 Ilene Pabon  is an “extremely talented” (Papercut Magazine) Mezzo-Soprano who is thrilled to be returning to St. Petersburg Opera!

Anne Midgette of The Washington Post wrote “Ilene Pabon maintained a kind of Angelina Jolie-like imperturbability as the beautiful Estella.”

Ilene is equally at home with musical theater. She was the Angel in the National Tour of Cirque Dreams Holidaze, as well as Rosalia in St. Petersburg Opera’s production of West Side Story.

In February of 2013 she collaborated with producer Brad Walsh on the Christian Siriano Fall/Winter 2013 runway music for New York Fashion Week inspired by Russian Opera.  Their musical collaboration received great acclaim by publications such as MTV style, Papercut Magazine and fashionista.

Ilene received her training at the Manhattan School of Music Preparatory Division, the Oberlin Conservatory of Music, Purchase College, and the University of Maryland, College Park as a member of the prestigious Maryland Opera Studio, where she received her M.M. in Opera Performance. Ilene currently resides in New York City.

INTO THE WOODS – STEPSISTER FLORINDA and COVER LITTLE RED