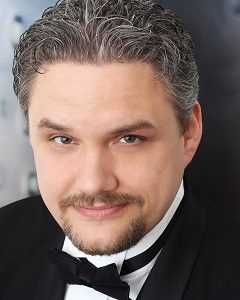 After reaching the semifinals of Cincinnati Opera’s Opera Idol competition in 2011, tenor Samuel Hall has continued his career on the concert stage, in musical theater, operetta, and opera.

This year, Sam was a Resident Artist with Opera Naples, singing the role of Giovanni in Daniel Catán’s La hija de Rappaccini in March, and  covered the role of Hoffmann in Les contes d’Hoffmann for St. Petersburg Opera in June. In October, Sam will make his role debut as the title character in Gounod’s Faust, also with St. Petersburg Opera.

In 2016, Sam sang with Sarasota Opera as an Apprentice Artist, then appeared as Benvolio in Gounod’s Roméo et Juliette with Opera Grand Rapids in April. July saw him playing Prince Karl Franz in Orlando Light Opera’s The Student Prince, and in the fall he returned to St. Petersburg Opera to cover the role of Manrico in Il Trovatore.

Sam’s 2015 Opera Columbus mainstage debut was as Don Curzio in The Marriage of Figaro. He then joined St. Petersburg Opera as an Emerging Artist, covering the roles of Calàf in Turandot and Don José in Carmen. Other opera credits include Gherardo (Gianni Schicchi), King Kaspar (Amahl and the Night Visitors), and Nelson Deadly (Too Many Sopranos), as well as covering the role of Canio (Pagliacci), all with Opera Project Columbus.

In addition to his operatic roles, Sam played Monsieur Thénardier in Mansfield Renaissance Theater’s production of Les Misérables, was the tenor soloist in Beethoven’s Ninth Symphony with the New Albany Symphony, and performed excerpts from Madama Butterfly with the Tampa Bay Symphony.

Sam Hall graduated from the Interlochen Arts Academy, and studied with John Maloy at the Eastman School of Music.