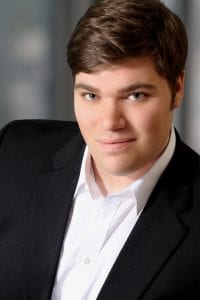 (Danilo) A recent graduate of the Ryan Opera Center at the Lyric Opera of Chicago, tenor Jesse Donner has already distinguished himself on the operatic and concert stage with his “vibrant” (Chicago Classical Review) and “fresh and juicy” (Chicago Tribune) voice. His 2019-2020 season includes a return to Union Avenue Opera in his role debut as Rodolfo (LA BOHEME), a return to the Louisville Orchestra as the Tenor Soloist in Verdi’s REQUIEM and Handel’s MESSIAH, a return to Dupage Opera as Danilo (THE MERRY WIDOW), and his concert debut with the New Jersey Festival Orchestra.

In previous seasons, Mr. Donner joined the Louisville Orchestra as the soloist in Mozart’s REQUIEM and Handel’s MESSIAH, Toledo Opera for their Fall Gala Concert and returned to the Chicago Philharmonic to solo on their Concert for Peace as part of their Polish Festival. He also made debuts with Union Avenue Opera as Ismaele (NABUCCO) and Dupage Opera as Eisenstein (DIE FLEDERMAUS), and sang Emporer Alteum (TURANDOT) with Cedar Rapids Opera.

Mr. Donner was a resident artist at Lyric Opera of Chicago from 2014-2017, where he was commended for his “polished” and “heroic” tenor (Chicago Classical Review). Mr. Donner won the 2015 Luminarts Fellowship and the Bel Canto grand prize, received the 2014 George Shirley Award for Opera Performance, a special encouragement award from the 2014 Metropolitan Opera National Council Regional Auditions, and first place in the 2012 Michigan Friends of Opera Competition. A native of Des Moines, IA, Mr. Donner completed graduate and post-graduate studies at the University of Michigan and received a Bachelor of Music degree from Iowa State University.