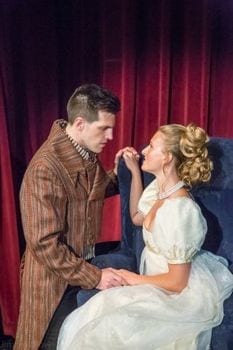 William S. Oser says in Talkin’ Broadway “I would have been delighted to encounter a performance this good of this opera at any of the … European Opera Houses.”

The glories of this production all come from the infrastructure of St. Petersburg Opera, Maestro Mark Sforzini (why aren’t other regional opera companies banging on his door?), the orchestra (38 strong), and the chorus, especially the men. Maestro Sforzini leads a crisp performance, well judged for tempos, and holds it all together without direct eye contact with his singers. The orchestra plays beautifully throughout, special mention to the horns who have a lovely solo to open the epilogue which is breathtakingly beautiful, and there are many other equally lovely solo moments. The chorus is lusty and always together.

Hoffmann is sung by John Kaneklides, singing well, with great stage presence, a fine romantic hero. The only thing he lacks is the voix mixte, a technique unique to French opera, although many very famous tenors have attempted this part without it, often to limited success. Kathleen Shelton is Nicklausse, Hoffmann’s sidekick and muse. In this version the part is elevated to a starring role and she does real justice to the two less familiar arias, especially the “violin aria” in the Antonia act. A slightly gentler sound is ideal for this part, and she is more Octavian in Der Rosenkavalier than French mezzo (excluding Carmen), but with singing this exciting I find it hard to quibble.

The four villains (Lindorf, Coppélius, Dr. Miracle, and Dapertutto) are played by William Roberts who brings the right physical darkness and acting chops and sings well. The ladies are Kelly Curtin as Olympia, with top notes and roulades aplenty but who just does not bring the crispness that I yearn to hear in her showcase aria (“Les Oiseaux dans la charmille”); Lara Lynn McGill as Antonia, an exciting performance that raises the temperature of the entire act; and Susan Hellman Spatafora as Giulietta, which is the least interesting of the ladies to sing, having no aria of her own. I can mention that Ms. Spatafora was outstanding as Susanna in the opera of the same name a few years ago. Lucas Levy plays servants in all three acts and makes a meal of his comic aria in the Antonia act. He brings to mind the recently deceased Nico Castel, a character tenor and language coach for the Metropolitan Opera who loved to trot this aria out at parties. Two dancing soloists, Vanessa Russo and Dominiq Luckie, play the Spirits of Beer and Wine. All the many comprimario roles are well taken.

Stage direction by Karl W. Hesser is not the strongest element of this show; I had several quibbles about specific things that are in the show or left out of it, such as not winding Olympia, the mechanical doll. Moving a large chorus in and out of the cramped stage space is a challenge not fully met. Choreography by Daryl Gray is pleasant but I would opt out of the dancing spirits, not specifically called for by librettist Jules Barbier. The set design by Stephen Mitchell is quite effective. Costume design by Wardrobe Witchery is much more effective for principals than the chorus. Wigs and makeup design by Nottingham Designs are hit and miss. Lighting design by Keith Arsenault is the strongest of the technical aspects of the production

As always, I prefer a live, flawed performance of an opera to a perfect recording or DVD. There is no way to put into words the aural excitement of unamplified singers and an orchestra.

Here is more from that full review: