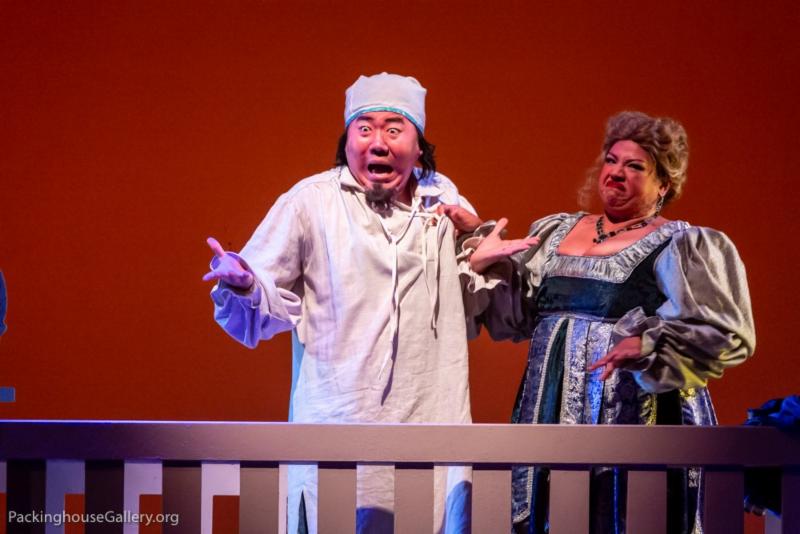 Puccini’s Il Tritico (The Triptych) is likely to be a night of heaven for me in an opera house. Two thirds of the opera, Suor Angelica and Gianni Schicchi (Il Tabarro is missing), results in only a slight reduction of that heaven.

One thing I have noticed about the plucky St. Petersburg Opera is, the bigger the challenge, the more successful the results. I introduced myself to this company with their production of Carlisle Floyd’s Susannah and have since marveled at quite good productions of The Tales of Hoffmann, Faust, The Magic Flute, and Turandot, among others. The two operas on display are both difficult to produce well.

Suor Angelica is the story of a young girl, dropped into a nunnery seven years earlier because of an indiscretion. A much longed for visit from her aunt, La Principessa, reveals that Angelica’s son died two years earlier, leading to the denouement all in a compact 50 minutes. A quick synopsis cannot reveal Puccini’s painting of life in the convent which adds so much richness to this piece.

Susan Hellman Spatafora takes on the title role, the equal of a far more well known soprano I saw years ago. A few of the early musical lines drift a bit below the strongest parts of her voice, but once in the confrontation scene and heading toward the ending, she shows her best and turns in a blazing performance. In the very end (spoiler alert), when the ghost of the son appears and a brilliant piece of stage craft, I was sobbing. I really wondered if I could hold it together for the last five minutes.

Claudia Chapa is La Principessa as a force of nature. Her performance could use a touch more nuance, but who is going to complain with this kind of powerhouse singing? Other very nice cameos include Juliana Curcio as The Monitress, Rachelle Moss as The Mistress of the Novices, and Stephanie Jabre as Sister Genovieffa. It unfair to choose one artist over another, because this piece is a true ensemble work and everyone singing on the stage is first rate.

Gianni Schicchi is Puccini’s only comedy and one of the greatest in the whole opera repertoire. It is the story of a greedy family whose rich uncle/cousin/brother-in-law dies at the top of the show. The will is not to their liking, and Rinuccio, already in love with Gianni Schicchi’s daughter Lauretta, suggests that he can help them out of their mess. Total mayhem ensues and for his crime, Schicchi lands in the circle of hell. In the final moments of the opera, he speaks to the audience, asking their forgiveness for his misdeeds and to show it via applause. SeungHyeon Baek has great stage presence in the title role. His aria regarding what the punishment for all might be if they are caught in forgery wrings much laughter from the audience. Lucas Levy as Rinuccio and Stephanie Jabre as Lauretta are both darling. She gets one of Puccini’s best loved arias (“Oh mio babbino caro”) and he has a lovely paean to the city of Firenza. Claudia Chapa returns as cousin Zita, a force of nature within the family. All of the rest of the ensemble cast are excellent.

As always, the superhero of this and every SPO production is Maestro Mark Sforzini and his orchestra. He brings clarity to the most complex of operas and his pacing is always right on target. His orchestra plays like a seasoned ensemble, except for a messy opening few bars of Gianni Schicchi. When that happens, I wish the Maestro might stop and restart as I saw the great Sarah Caldwell do, many years ago at the top of a performance of Falstaff.

The Palladium presents staging challenges for St. Petersburg Opera. The reasonable-sized stage is reduced by the necessity of having the orchestra (39 pieces for this show) on stage, rear. Stage director Josh Miller does an extraordinary job with Suor Angelica; the smallness of the courtyard suggests that perhaps this is not the wealthiest of convents. The first twenty minutes, which can become sluggish and uninteresting, hold together well. Gianni Schicchi gets a little out of control on stage, but that is built into the piece. There are lots of nice touches throughout the staging. One in particular caught my eye. During the sequence when all the family members are trying to influence Schicchi for the best of the riches, Puccini has a little trio for two wives and Zita, all trying to use their feminine wiles. I’ve always thought it a lovely moment in the piece that often goes for naught if not well staged. Here, Miller gives it its due. All in all, lovely stagings.

Costume design is credited to Glenn A. Breed, although from the lavishness of what is seen on stage, I suspect they are rented from somewhere. Keith Arsenault does his usual fine job with lighting, and wigs and makeup design is by Brittany Rappise.

In St. Petersburg Opera’s 2019-20 season, there are a few changes to what has been the norm, three mainstage shows instead of the previous four, no more fully staged musical. Instead, there are three Broadway Cabarets, each with multiple performances, whereas this feature had been a once a year, two performance only event. I think that may be a good artistic decision, as there are only so many musicals that work in an opera environment and SPO has already staged many of them. The mainstage productions are The Merry Widow in October, Rigoletto (also on stage at Sarasota Opera in October) in late January, and The Daughter of the Regiment with extra performances in June.

This presentation of Suor Angelica and Gianni Schicchi is a complete triumph for St. Petersburg Opera. The three operas that make up Il Tritico have never caught on the way the most popular of Puccini’s works have, possibly because of the difficulty of staging them. There is one more performance on May 21 and opera fans in Tampa Bay would be foolish to miss these productions. 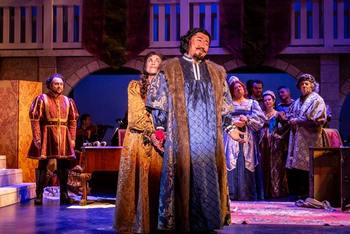