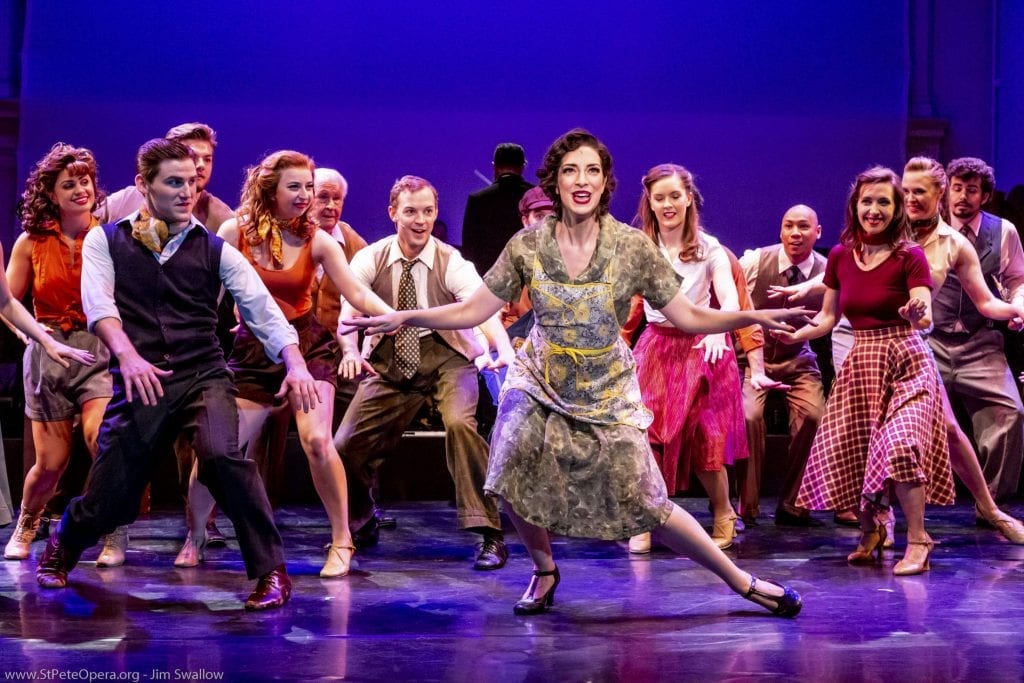 William S. Oser
Any self-respecting musical lover in this area is already planning to or better get to The Palladium Theater in St. Petersburg for one of the three remaining performances of St. Petersburg Opera Company’s excellent Kiss Me, Kate. Kiss Me, Kate opened in December of 1948 as a big fat hit and lasted into 1951. It has Cole Porter’s greatest score and a funny book by Bella and Samuel Spewack; and I have no problem putting it on both my list of greatest musicals ever written and favorite musicals. In those days the actors were not mic’d, so they had to really sing, and this one makes heavy musical demands. It ain’t opera, although Alfred Drake who starred in the original production did cross over into operetta and even dipped a couple of toes into opera as well—the style is decidedly Broadway. St. Petersburg Opera delivers the musical goods and a good deal more. Although the cast is mic’d, they still sing in the more open, legitimate style, de rigueur for this piece. The last Broadway revival succeeded with its Lili Vanessi, the late Marin Mazzie, but I found it wanting with the singing of its Fred Graham, Brian Stokes Mitchell, who didn’t fully rise to the demands.

On top of that, the production decided to update the book and the orchestrations by Robert Russell Bennett. Thank goodness St. Petersburg Opera bypassed that version, more readily rentable, and went back to the original. The Palladium presents some built-in challenges: limited wing space, no place for the orchestra except on the stage. Usually the company puts up some sort of stage setting, blocking the view of the orchestra and cramping playing space. For this show they decided to forgo that and use only interchangeable panels on either side to help define the setting. Furniture, etc. is kept to a minimum to allow for as much space for dancing as possible, and dance is a huge piece of Kiss Me, Kate. The staging by Daryl Gray is inventive for the space and his choreography is excellent, considering the limitations extant. Michael Kelly plays Fred Graham and his singing is sensational, light for the opera stage but perfect for a piece like this and its cousin, operetta. His diction is superb, and he rattles off the Shakespearean dialogue (the story involves a group of actors preparing a musical version of The Taming of the Shrew) with aplomb. The only thing separating his performance from one for the ages is a touch of insouciance.

Michele Sexton cuts a glamorous figure as Lili Vanessi, returning to the stage after a stint in the flickers. Her singing is excellent, but the part is pitched for a singer happy in the low regions of her voice, while Ms. Sexton’s blossoms as it ascends. This is minor stuff, as she fills the role with all the star power it requires, and her acting is the equal of her singing. Monica Charline Brown is Lois Lane, current amour to Fred and previously to many other men. Ms. Brown certainly knows how to put over this comic part with pizzazz, but could use a little more help holding the stage in her act two “Always True to You (In My Fashion).” Fortunately, Cole Porter provided that help via an almost guaranteed showstopper with multiple encores. Charles Logan, who plays Bill Calhoun, is a known quantity to those in the Tampa Bay area, where he more regularly lights up the stages. Although I knew him to be a fine dancer, I didn’t realize that his range extends to ballet as well. His tap specialty in “Bianca” is delightful. Sarah Best as Hattie gets musical things off to a great start with one of the two greatest odes to theater, “Another Op’nin’ Another Show” (“There’s No Business Like Show Business” is the other), while Curtis Bannister sizzles the second act off to an equally great start with “Too Darn Hot.” Kiss Me, Kate is loaded with small roles that can be very telling and so many of them are well taken here, raising the entertainment level of this production.

First there is Gremio played by Andy Frank and Hortensio played by Michael James, both featured in “Tom, Dick or Harry” along with Charles Logan as Bill Calhoun / Lucentio. All three have fine dance solos in the number. Then we have Shaun Riche and Ward G. Smith as gangsters who stop the show yet again with “Brush Up Your Shakespeare.” Hector Flores, Jr., Robert Rigsby, and Joseph Rebella as servants Nathanial, Gregory and Philip step out of the ensemble for some comic bits. I am especially proud of Mr. Rebella who is a hometown product and someone I have watched blossom on area stages. The ensemble is full of people seen regularly on Tampa Bay and Bradenton/Sarasota stages, old stage friends, so to speak. Good conducting is a major asset in making a production soar rather than struggle and Maestro Mark Sforzini leads his 21-piece orchestra with zest. I came to this production hoping to hear a good account of Cole Porter’s classic score, but it is so much more. The overture opens with a background chord and then all the reeds push out the opening of “Why Can’t You Behave?,” which also reappears at the top of “Always True to You (In My Fashion).”
Maestro’s orchestra play superbly for him and he leads with love. He also gets involved a bit in the action a couple of times in the second act. He is a bit of a ham (or a Hamlet) and the audience loves it. Costumes are by Broadway Costumes, Inc., and based on a study of archival materials of the original Broadway designs by Lemuel Ayers, they are an homage to them with eye-popping colors. Lighting design is by Keith Arsenault. St. Petersburg Opera Company offers a fine account of this classic musical, beautifully sung with the dramatic end more than decently done. I urge everyone in the area to scoop up the limited tickets for the three performances remaining. Kiss Me, Kate, through February 10, 2019, at St. Petersburg Opera Company, Palladium Theater, 253 Fifth Ave. N., St. Petersburg FL. For tickets and information, see www.stpeteopera.org. Cast:
Fred Graham/Petruchio: Michael Kelly
Lilli Vanessi/Kate: Michele Sexton
Bill Calhoun/Lucentio: Charlie Logan
Lois Lane/Bianca: Monica Charline Brown
Hortensio: Michael James
Gremio: Andy Frank
Gangster I: Shaun Rice
Gangster II: Ward G. Smith
Hattie: Sarah Best
Paul: Curtis Bannister
Harrison Howell: Stephen M. Ray, Jr.
Henry Trevor/Baptista: Karl W. Hesser
Stage Doorman: John Zilles
Ralph: Zachary Twitty
Dance and Vocal Ensemble: Matt Acquard, Alejandro Donawa, Eliza Engle, Hector Flores Jr., Mary Anne Furey, Hailey Hendrickson, Keely Karalis, Caitlin McKechney, Allison Podolsky, Stephen Ray Jr., Joseph Rebella, Robert Rigsby, Chris Romeo, Caitlin Ruddy, Vanessa Russo, Luisa Sabella, Rachael Scarr, Jeff Tierney, Erin Weinberger